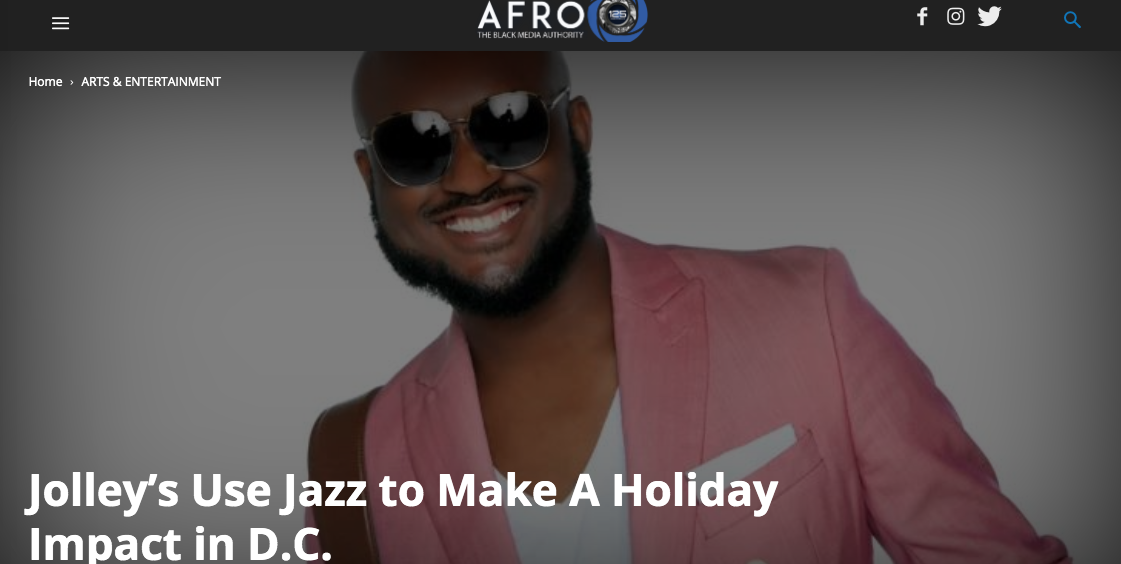 Posted at 12:09h in NEWS by lionpackmusic

There are those who need the spirit of Christmas time to feel jolly. But when your passion is jazz music and you can practice your passion professionally with your brother and some of today’s accomplished mainstream contemporary artists, each day is a jolly one for sure.

Such is the life of Stellar Award nominated and D.C. native musician Nate “Impact” Jolley. Jolley was nominated this year for his production work on Grammy-nominated R&B singer, Kenny Lattimore’s “A Kenny Lattimore Christmas” project. Professional recognition has given him a platform to impact both the music industry and the community that means so much to him.

“D.C. shaped my career by being the greatest city on the planet,” Nate “Impact” Jolley tells the AFRO. “It’s important for me to come home and give back during the holiday season.”

Jolley continued a family tradition by hosting his sixth annual A Jolley Christmas live jazz performance and toy drive Dec. 22 at Sotto on 14th Street in Northwest D.C. Since 2012 Nate and his twin brother, acclaimed pianist Noble Jolley Jr., have hosted a series of holiday performances to benefit underprivileged kids through his former company, Ready, Set, Impact every year except 2015.

The Jolley twins – born two and a half minutes apart – made the annual cross-country trek for another holiday celebration in their hometown. Not only do they help ensure that children of the District have toys under their trees on Christmas morning, they also share their talents with local audiences with special benefit performances.

The Jolley brothers also performed live at Holiday Sing with The Temptations and at the John F. Kennedy Center for Performing Arts to benefit The Boys & Girls Club of Greater Washington. It was a celebration of holiday traditions around the world where they performed holiday classics and original compositions accompanied by a 15-piece chamber orchestra and a mass choir.

This orchestra was comprised of students from the D.C. Youth Orchestra and the members of the Boys and Girls Club to benefit arts instruction and inner-city programming that has served the Greater Washington area for more than 135 years.

The Jolley’s began their holiday tradition by hosting live music performances at the historic Bohemian Cavern before it closed in collaboration with Toys 4 Tots and Starbucks. This year, Nate Impact, who now resides in Los Angeles, Calif., returned home to the District to host this event at a new location and under the direction of his new company, Lion Pack Music Group but with the same mission of donating at least 100 toys in just one night to local organizations and individual families.

“Giving back to the community is important and kids should be able to feel special and loved especially around the holidays,” said Nate Impact.

In Southern California the vibe of D.C. arts community continues to serve as inspiration for Stellar Award nominated musician. The Jolley brothers may live and work in Los Angeles but, during every holiday season there is no place like home. They remain committed to fulfill the obligation of serving their community which was taught to them by their father Noble Jolley, Sr.

The brothers’ giving back isn’t just a holiday thing either. In 2009, as students at John Hopkins University Peabody Conservatory the Jolley brothers helped launch a multimillion-dollar scholarship fund in their father’s name, to help develop aspiring jazz musicians. The senior Jolley was the first jazz graduate from Howard University’s School of Music and the new record label will bring credibility to their fundraising efforts.